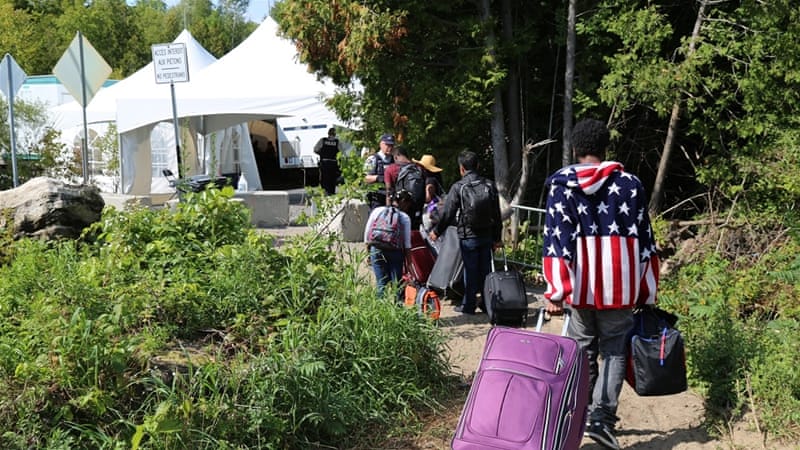 Asylum and human rights in the United States and Canada. Questions to Giorgio Agamben

In 2006, the so-called war against drug trafficking began in Mexico, and in 2007, the country ranked as one of the main sources of asylum requests to Canada. In 2009, asylum claims reached record numbers, and that year Canada imposed a visa on Mexicans on the grounds that it took advantage of the Canadian refuge system to make false asylum claims. In 2010, the number of requests to Canada began to decrease. However, the number of requests to the United States doubled from 2010 and some began to be registered in European countries such as Spain, France, Norway, Sweden, the United Kingdom and even Luxembourg. This trend indicates that while some people wanted to use the Canadian asylum system to migrate for economic reasons, It is also true that there is a situation that generates real asylum requests in the context of the war on drugs, particularly to the United States and Canada.

However, with few exceptions, the asylum applications of Mexicans have not been successful in the United States and Canadian courts because, they assure, Mexicans are not persecuted within the meaning of the Convention on the Status of Refugees (1951) established in its Article 1 (A2) that a refugee is any person who flees his own country due to persecution based on race, religion, nationality, membership of a certain social group or political opinions.

This article will argue that the rejection of asylum claims by Mexicans in the United States and Canada openly questions the conclusions of the Italian philosopher Giorgio Agamben, whose work has profoundly influenced the analysis of refuge systems around the world, as well as in the meaning of the figure of the refugee in our time. In his conclusions, Agamben argues that because it is the main receptacle for human rights declarations –which transcend citizen rights–, the refugee is stripped of any political character and reduced to a biological life similar to that of animals, without the possibility of resistance. Here it will be argued that, contrary to what Agamben pointed out, the figure of the refugee is highly politicized.

In this text, a discussion of Agamben’s thinking about bare life and homo priest will be presented first., as well as the main criticisms of these ideas, to propose a new perspective to the approach that questions his vision of the humanitarian and the political. Later, to refute his argument that the refugee is a depoliticized entity, two aspects of the war against drug trafficking that affect the politicization of the refugee idea will be discussed: first, the demand for political rationality in the legal constitution of the asylum claims and, second, the political role of the refusal of the United States and Canada to use concepts such as “new war” and “failed state” in the Mexican conflict. Finally, it will conclude with a brief note about how these factors question Agamben’s idea of ​​politics in the figure of the refugee.

THE THOUGHT OF AGAMBEN

ENVIRONMENT TO THE NUDA LIFE AND THE REFUGEE

The work of the philosopher Giorgio Agamben has had an impact on the political debate of the new millennium, in particular two of his ideas: the bare life that characterizes the subject of sovereign politics (Agamben, 1998; 2001) and the State of exception (as the rule and not the caveat) in contemporary democracies (Agamben, 2004; Agamben and McCuaig, 2010). However, in this work the focus will be based on the idea of ​​the bare life that distinguishes the homo priest, as it is the one related to the figure of the refugee.

In his book Homo priest. Sovereign power and bare life(1998), Agamben starts from a totally provocative intention: that of “correcting” or “completing” the work of the French historian Michel Foucault on biopolitics (Foucault, 2004; 2006a; 2006b), and of the German Jewish philosopher Hanna Arendt on the political significance of the concentration camp and human rights (Arendt, 1976). First, in his “correction” to Foucault, Agamben focuses on the analysis of the historical development of state power.

Agamben returns to the reflection on Foucault’s biopolitics and equates biological life with the zoé of the Greeks, that is to say, the simple and mundane life, opposite and separated from bios , political life. Agamben finds the origin of the inclusion of zoé in political power in the figure of the homo priest . This is a political-legal figure of antiquity that refers to the person who has been tried and blamed for a crime, and, although it is not allowed to sacrifice him, whoever kills him will not be accused of murder. The person who remains in total lack of protection of the law is included in it only because of his exclusion.

The bare life of homo priestit is subject to politics only through exception. For Agamben, the homo priest , as that person who can be killed but not sacrificed, is the first figure who establishes the biopolitical power of the sovereign because he subjectivizes bare life not through his inclusion in the legal order, but through his exclusion ( Agamben, 1998). Tracing the origin of the inclusion of bare life in the control of the State in the homo priest , Agamben discards that biopolitics began in the 16th century, as Foucault assures. Therefore, for Agamben, modern politics is not characterized by the fact that Zoé It is the main object of state power, but because the realm of bare life –which is located on the margins of the political order– gradually begins to coincide with the political realm (Agamben, 1998).

Second, after rebuking Foucault, Agamben lashes out at another great figure in modern philosophy: Hannah Arendt. Like Foucault, Agamben claims that Arendt has not completed his work, specifically reproaches him for not having a biopolitical perspective in his reflection on the political meaning of the concentration camp. Arendt wrote that the openly recognized goal of totalitarian regimes was to possess command globally, but that the never openly admitted goal was to possess total dominance.

With these provocative criticisms, Agamben’s philosophical task is to “complete” or “correct” the work of Foucault and Arendt, and to make them coincide on one point. Agamben proposes that said point be the idea of ​​bare life already described. Its conclusions are devastating to human rights thinking and the possibility of an emancipatory human rights policy in the biopower era, since human rights declarations are said to inscribe bare life in the political-legal order of the nation state and not they are an expression of resistance to the evolution of state power as Foucault objects. With declarations of rights, bare life enters the structure of the State and becomes the foundation of its legitimacy and sovereignty. Agamben notes that:

A simple analysis of the text of the Declaration of 1789 shows that it is precisely the bare life – that is, the simple fact of being born – modernity is placed at the base of the order vanishes in the figure of the citizen, in whom rights are preserved … And the Declaration can attribute sovereignty to the nation […] precisely because it has already inscribed this element of birth in the very heart of the political community The nation – the term derives etymologically from the word nascere(to be born) – closes the open circle of the birth of man (Agamben, 1998: 126-127). one

The politicization of bare life is evident when the adjudication of rights transforms the simple “man” into a “citizen”, and in that passage invests him with sovereignty. But through human rights declarations, says Agamben, what remains at the base is not the person as a free and conscious political subject, but simply the bare life of man . 2 Therefore, once the zoé becomes politicized with the declarations of rights, says Agamben, it is more difficult to find the thresholds that define the new homo priest, the person who in our time can be killed, but not sacrificed, whose life can be taken by anyone, without being persecuted for it, because in theory today everyone has human rights that support and include them in the polis . Agamben proposes that the homo priest of our time, the person who today has a life of legal and political exclusion, subject to violence and vulnerability, is the refugee.

The figure of the refugee represents a break in the continuity between “man” and “citizen”. The refugee establishes the division between birth and nationality, and with that the person who has that status has nothing more than human rights. For Agamben:

By bringing to light the difference between birth and nation, the refugee makes the secret budget of the political domain – bare life – appear momentarily in that domain. In this sense, the refugee is the true “man of rights” suggested by Arendt, the first and only real appearance of rights outside the fiction of the citizen who always covers them […] (Agamben, 1998).

For the purposes of this article, it can be said that for Agamben, the refugee is the clear example of the depoliticization of the sphere of his protection, that is, of the sphere of the human and human sphere. On the one hand, States are interested in natural life, distinguishing between an authentic life and one devoid of any political value, and on the other, human rights are used outside the context of citizenship for the protection of bare life. , which is increasingly on the margins of nation states (Agamben, 1998: 132-33).

Because of these characteristics, for Agamben the refugee is the best representation of the contemporary homo priest : he who is included in the political and legal aspects only through his exclusion, for which he can be assassinated without it being considered a crime. The refugee embodies the bare life, a simply biological human life, without political value, so his protection has been removed from the political field and has been left in the strictly humanitarian field. Refugee detention camps are, consequently, the new concentration camp that expresses the totalitarian sophistication of contemporary biopolitics (Agamben, 1998).

The Refugee Idea as an Expression of Homo PriestContemporary has been highly influential in studies on the vulnerable status of refugees in Europe and North America (Darling, 2009; Tyler, 2010, Edkins and Pin-Fat, 2005; Owens, 2009; Muller, 2004; Zylinska, 2004). However, it has also been criticized for its nihilism and for understanding the political from a perspective that cancels all possibility of resistance and emancipation, especially in the case of refugees (Owens, 2009; Juniper, 2006), but also in what general (Laclau, 2008). Likewise, Agamben has been criticized for universalizing the idea of ​​bare life, without heeding Foucault’s argument about the role that racism has in the exercise of bio-power (Butler, 2006).

A less frequent criticism, but that will be a matter of deepening here, It will be the one referring to the idea of ​​the depoliticization of the refugee and its scope of protection – the humanitarian (Heins, 2006). Heins assures that although the humanitarian is split from the political, his objective is not bare life, but the reactivation of which refugees live. In this paper, a different vein of this same criticism will be chosen and it will be argued that, even when the humanitarian and the political may be separated, the legal constitution of the refugee and the judicial decisions on who is deserving of status is a deeply politicized dimension.